Tokyo 2020 Olympics is going to be held from 2021 July 23 to August 8. As the Tokyo 2020 was postponed due to the corona pandemic, the event is set to begin after being delayed by a year. Nepal has completed all the necessary preparation for the event. Nepal is participating in the Olympics for the 14th time, and coincidentally it takes us back to Tokyo. Nepal began its Olympic journey by participating in the 1964 Tokyo Olympics. Nepal's 26 members Olympic contingent comprises Players, Coaches, and Officials. There are 5 players and 4 coaches who will be representing the country in the Olympics.
Gaurika Singh and Alexander Gadegaard Shah of swimming, KalpanaPariyar of Shooting, SoniyaBhatta of Judo, and SaraswatiChaudhary of Athletics will compete in the games. Gaurika and Alex will compete in their respective 100m freestyle events. Kalpana will compete in the Women's 10m Air Rifle while Soniya will battle in the -48kg weight category. Saraswati will compete in the Women's 100m race.

Shankar Karki (Swimming), AseemYadav (Shooting), Surya Narayan Shrestha (Judo), and IndrakumariMalla (Athletics) will be traveling to Tokyo as part of the coaching unit. Two swimmers and sprinter Saraswati are participating via Universality Places while Judo and Shooting are represented via Wild Card invitation from their respective sports.
Member Secretary of National Sports Council (NSC), Mr. Ramesh Kumar Silwal will be Chef de Mission of the games for Nepal. Swimmer Gaurika Singh will be the flag bearer for Nepal in the opening ceremony.

Nepal started its preparation for the Tokyo 2020 in May 2019 with 12 players of 7 games receiving the Olympic Scholarship from the International Olympic Committee. This is the longest and strongest preparation Nepal has had in its Olympic history. Despite the adverse effects of the coronavirus pandemic, the training was carried out with safety measures.

The Olympic preparation was carried out in constant coordination between NOC, NSC, Ministry of Youth and Sports as well as respective sports associations. In a bid to prepare for the Olympics, Two crores rupees have been spent as part of the Olympics scholarship. This is also one of the reasons we are hopeful of better results from the athletes in the games.

In the later stages, the closed camp of participating athletes was done by National Sports Council. Currently, the swimming team is training in Tokushima Prefecture in Japan. NOC is hopeful that the pre-training camp will be beneficial for the players in a bid to produce improved performance. We tried our best to manage similar foreign camps for other sports but the coronavirus situation meant our effort did not come to fruition.

To represent Nepal in the Olympics is a symbol of pride for the players and coaches. We would like to extend our congratulations and best wishes to all the participating athletes and coaches. We believe they will produce the best of results in the games.

Nepal has been pitted in Group '1' by the organizers in groups divided as per the severity of the coronavirus situation. For the safety measures, all the players, coaches, managers, and officials have received their two doses of vaccines. According to the rules, Nepalese representatives will need to undergo regular PCR tests for seven days. Also, all the representatives will need to stay in Three-day quarantine after reaching Tokyo.

Daraz, under the auspices of Alibaba, will be promoting the Olympics. NOC has already signed an agreement with Daraz for the same. They will be promoting Nepal's participation in electronic media. Also, all the participating players, coaches, and officials will be sponsored by Kelme. NOC has signed an agreement with Kamaru Trading for the kits of Tokyo 2020. 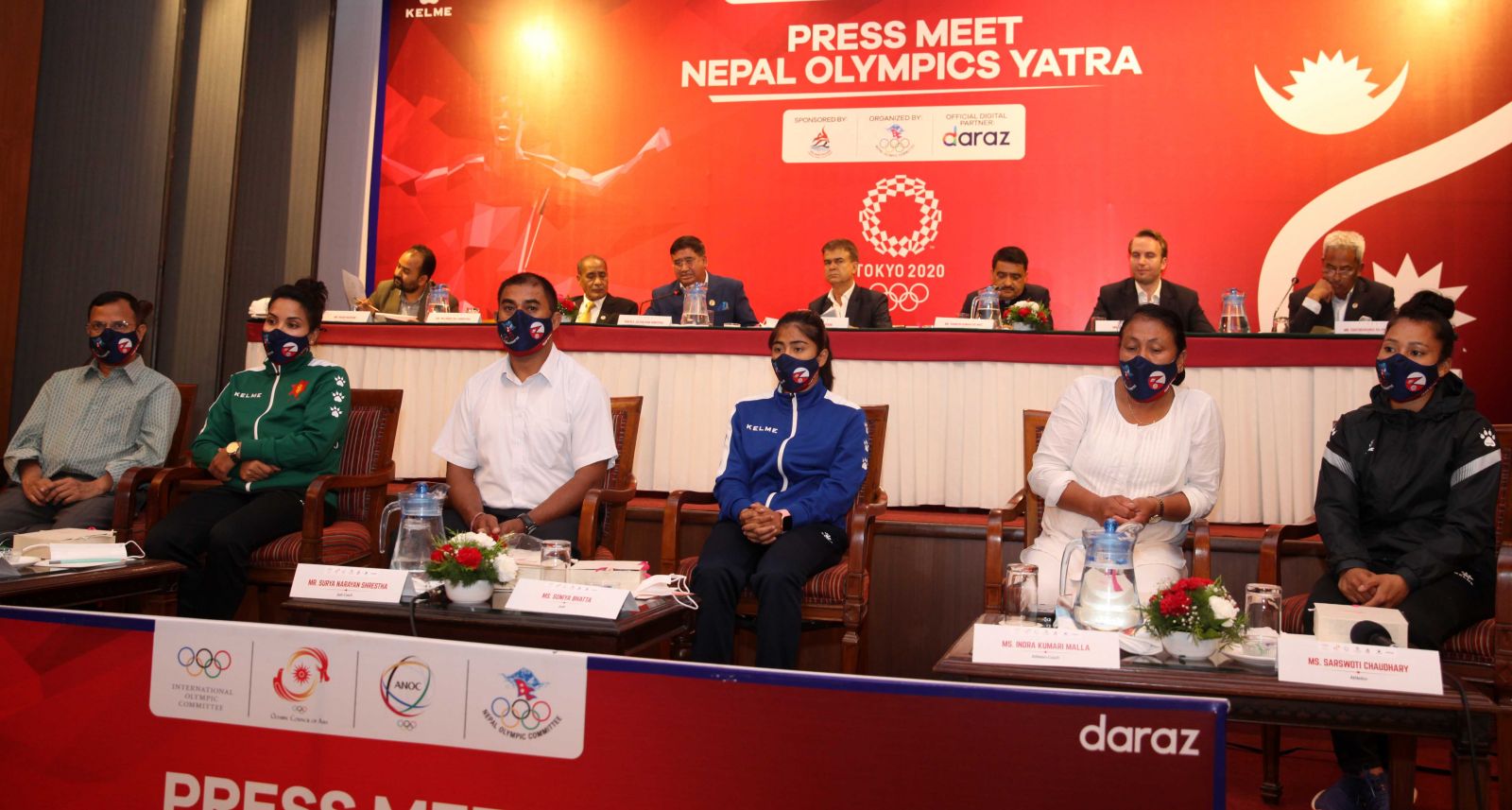