2020 Olympic Preparation Project
The purpose of this project is to improve the probability of the Nepalese Athletes to qualify for the Tokyo 2020 Olympic Games and help them give better performance.
Choosing the potential Athletes, bringing them under the project, training them by different National and International Coaches, sending them to suitable destination to train and in different competition in order to improve their skills are some of the activities which will be done by this project.
In the initiation of Nepal Olympic Committee, Tokyo 2020 preparation committee was formed by the executive board meeting of April 5, 2018. This committee is an independent committee which includes the Sports experts, experienced officials, private sector, Nepal Army, Nepal Police and Armed police personals.
This project aims to guide the athletes till the 2020 Tokyo Olympic Games.
29th June 2018
The Core Tokyo 2020 Preparation Committee of Nepal held a meeting in the Olympic Building, Satdobato Lalitpur on June 29, 2018 Friday. Nepal Olympic Committee President/Member of Parliament Honorable Jeevan Ram Shrestha chaired the meeting in the presence of the Vice Presidents of NOC Mr. Dhirendra Pradhan, Mr. Purendra Bikram Lakhe, Mrs. Jyoti Rana, Secretary General of NOC Mr. Lama Tendi Sherpa, Member Secretary of National Sports Council (NSC) Mr. Keshab Kumar Bista and Treasurer of NSC Mr. Sailesh Karmacharya.
The meeting decided on the immediate launch of the Olympic 2020 Preparation Project. 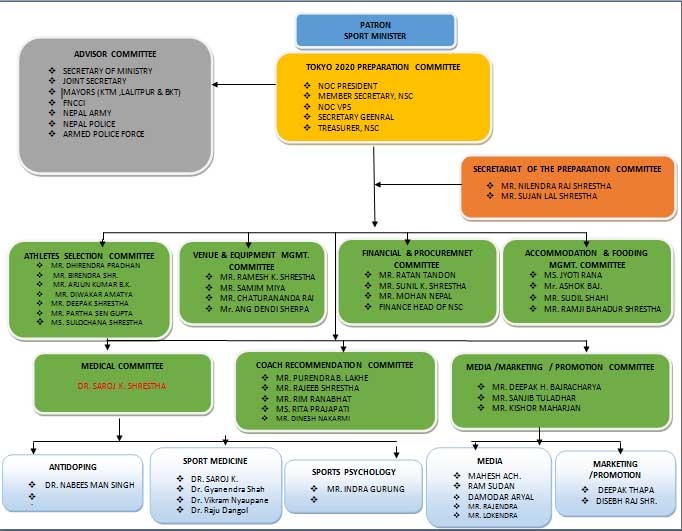